A Hurricane of Love at La Ermita 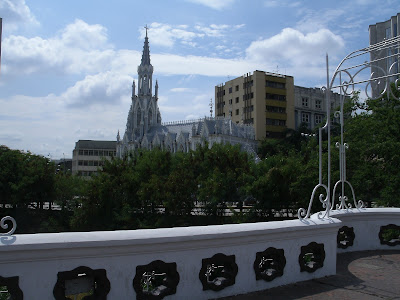 Built in 1678,  the small Catholic church called La Ermita (The Hermitage) was a simple structure on the Rio Cali. When an earthquake destroyed it in 1925, rebuilding it to it's current beauty took from 1930 to 1942. Now you'll find images of La Ermita in every montage, collage, or homage to the city of Cali. It's the jewel of Cali's crown. 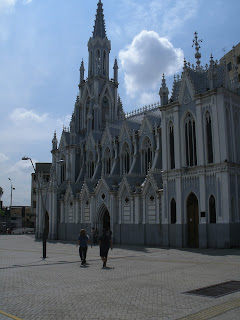 This neo-gothic church is inspired by the Ulm Cathedral, Germany, although it's a miniature of the giant original.
On a visit to Colombia with my family two years ago, we stopped at the church and my daughter and I stepped inside while a service was in progress. We only stayed a few moments -- to breathe in the atmosphere and to feast our eyes on the beauty -- and in those few moments, the words of the kind priest pulled me in. "Let us offer the world a hurricane of love," he said. I've been through hurricanes. That's a lot of love.
La Ermita plays a pivotal role in my novel, The Existence of Pity. Here's an excerpt.

All my life, I had seen La Ermita in passing, and I had studied the gray and white spires that were so ornate they looked as thought they belonged in Europe. I smiled at La Ermita's elaborate steeple, which reached toward heaven, not one bit sorry for its extravagance.
"Venga, mona, we don't have all day," Blanca said, pulling me inside the sanctuary. "I still have work to do when we get home."﻿
She opened one of the heavy doors, and the beauty of the church stole my breath. I took two steps in, admiring the stained-glass windows, the large statues, and the altars. Our Baptist church was nowhere near as beautiful. In our church, simple rows of wooden pews faced a pulpit and a pool to baptize those who wanted to be born again. In La Ermita, I could feel the presence of something greater than myself something that had been there long before me and would remain long after I was gone. Our church had love, but in the Catholic church was... majesty.


Want to read more? Click on the cover of The Existence of Pity for your own copy.
Posted by Jeannie Zokan at 8:55 PM