Unstoppable: My Life So Far 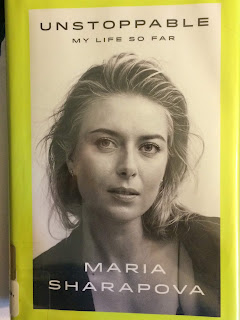 Unstoppable: My Life So Far is the memoir Maria Sharapova published in 2017, and it's an unforgettable read. I'm a tennis buff and love hearing about her drive and determination to win on the court, but her life story is fascinating, too.

Born in Russia one year after the Chernobyl incident, she writes, "If you had to pick one event that made me a player, it'd be Chernobyl." Because of the explosion, her family moved from the deadly area to the resort town of Sochi -- where they had tennis courts.

I remember where I was when I heard the chilling news of the explosion; in the small town of Tallassee, Alabama. I lived with my great aunt Nell, and after work I'd take long bike rides on lonely country roads. Every Friday night, Aunt Nell and I would go out to dinner with her friends at the Kowaliga Restaurant on Lake Martin (that's pronounced Ku-lie-ja). We'd eat too much, laugh too hard, talk too long, then come home too full to sleep, so we'd watch TV, laughing and talking some more. They were good, simple times, and I'm grateful for them, and for her.

Much later, my aunt asked me how many years I lived with her. "Six months," I said.

But back to Unstoppable. The main reason I want to share this book is because of what Sharapova says about writing. "I came to believe that the physical act of writing can reeducate your brain. By writing, you access certain thoughts and feelings that might otherwise remain hidden. You can bring them to the surface, where they can be understood and then dealt with."

It's no wonder Sharapova has won five grand slams! My favorite line from her book, though, the one that rings true, deep to my core, is this: "It's important to remember, but it's more important to forget." The context is a stunning defeat in the Australian Open that Sharapova was wise to put behind her, but the words mean so much more. In tennis it's important to learn the techniques, but at match time you have to stop thinking and just play. Remember, then forget. Trust what you've learned and be there when the ball bounces off the court and heads toward your racquet.

Aunt Nell's life wasn't an easy one, but she was good at living in the moment. The Great Depression, loved ones lost in WWII, a house burned to the ground, these didn't stop her from relishing laughter and friends and family. She would agree with Sharapova, too. "It's important to remember, but it's more important to forget." She's been gone almost twenty years and I still miss my Aunt Nell, and still think of her when I read about strong, determined, amazing women like Maria Sharapova..
Posted by Jeannie Zokan at 9:08 AM No comments: 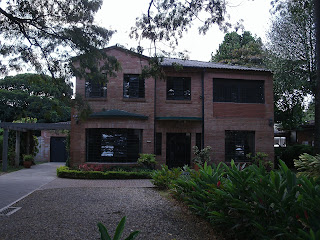 I can't wait for you to read it!
#RedAdeptPublishing #AuthorInterview
Posted by Jeannie Zokan at 8:18 PM No comments: