From Dream to Reality 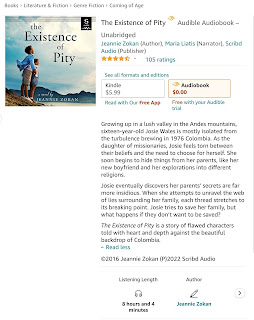 From the very beginning of my writing career I've wanted my work to be published in audio form. I think it's because I've always loved books on tape, then books on CD. I guess it's time to make the (belated, I know) jump into downloadable books.
There's nothing quite like listening to someone tell a story. Some favorites include the Harry Potter series, narrated by Jim Dale, and Angela's Ashes written and read by Frank McCourt. Now, (drumroll please!) I can add my book to that list of favorites.
Back in December (the 22nd, and it was in the morning lol), I got an email from my publisher, Red Adept Publishing, letting me know Scribd wanted to turn The Existence of Pity into an audiobook. I couldn't believe it, and didn't believe it, until I checked my Amazon page this past Thursday.

It's really happening! As of yesterday, my audiobook is live!! Scribd, founded in San Francisco in 2007, is an audio publishing company and a subscription service. It offers access to millions of ebooks, audiobooks, magazines, and more at the cost of $11.99 per month. Business Insider says "Scribd is overall the best and most convenient deal for online reading." I've joined and grabbed my book already.

And to hear my words read by Maria Liatis, WOW! What an incredible feeling! Since she's from Argentina, her Spanish is flawless. Since she studied Theatre and Dramatic Arts at University of Georgia (Go Dawgs!), her English is impeccable. All around, she does a fantastic job narrating. It's perfect in every way.

So if you want to sit back and have someone tell you my story, go to Scribd.

You can also get it from Audible on Amazon, or listen to a four-minute sample. I'd love to hear what you think!

Posted by Jeannie Zokan at 10:23 AM No comments: 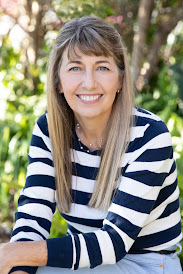 Jeannie Oliver Zokan, author of the award-winning The Existence of Pity and the recently released Courage Without Grace, both published by Red Adept Publishing, grew up in Colombia, South America as the daughter of missionaries. As a high school senior, she and her brother attended Christiansen Academy, a boarding school in Venezuela, but she also maintains strong ties to Colegio Bolivar, the American school she and her brothers attended in Cali. Her love of books led her to study Library Science, earning her bachelor's degree from Baylor University in Waco, Texas. She then moved to Washington, DC to attend The George Washington University, where she earned her Publication Specialist Certification. Much like Josie, the main character in both of her novels, Zokan became a palm reader in DC, working at the Park Hyatt Hotel, offering private readings, and entertaining at parties, most notably at one of many events hosted by Ben Bradlee and Sally Quinn.

When DC's cold weather finally did her in, she packed up her parka and headed south, taking her motorcycle to Florida's Gulf Coast to write stories for the local paper. She met her husband there, and they co-wrote "Healthy Living," a regular column for The Islander. She also launched Poetry Unbound, a newsletter she edited for over five years. Since then, her poems and stories have appeared in Emerald Coast Review and Hurricane Review. She has been among the winners for both the poetry and short fiction categories in the Walter F. Spara Writing Competition, and she placed in the Awakenings Poetry Contest and the World Congress of Poets Contest. In 2017, The Existence of Pity earned a spot as a finalist for the National Indie Excellence Book Awards.

For over a decade Zokan has participated in National Novel Writing Month (nanowrimo.org). Both of her novels were created during frenzied Novembers, along with other novels she plans to release. As an undeniable "pantser," she works best without an outline -- but with a firm deadline. Zokan served on the board of directors for the Emerald Coast Writers, where she has spent many hours with fellow writers, critiquing and being critiqued. She swears that the time spent in this sometimes painful process has been among her most rewarding. As they help each other attain their writing goals, many have become lifelong friends.

As a certified aerial yoga instructor, Zokan has taught yoga and is a Reiki Level II practitioner. She is currently the captain of her Ladies League tennis team, a group of fellow moms who enjoy a little friendly competition with lunch afterwards. One fine day, when Zokan's books become bestsellers, she will be able to write full-time, but for now she has a part-time job as a retail merchandiser for Hallmark. She lives ten minutes from the beach, where she and her husband, photographer and personal trainer Chris, enjoy swimming in the surf, walking along the shore, and absorbing negative ions. Many a rough draft of a chapter has been edited under their beach umbrella, basking in the inspiration of the Gulf of Mexico. 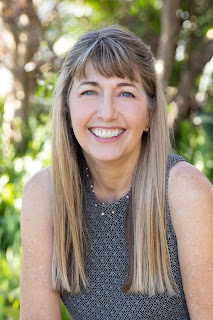 Zokan hasn't lost her love for libraries. One of her proudest moments occurred when she tracked down a copy of her book in her local library, where she hopes to find many more titles in the years to come. Her happiest days are when she gets a little writing in, visits their two grown daughters, (one in Orlando, the other in Alabama), and gets some exercise om, whether it's a bike ride, a run, tennis, yoga, or a workout in their home gym. Of course, her day isn't complete without cuddling up with their pets, a sweet black cat and a rambunctious "beagador" puppy.

To learn more, go to www.JeannieZokan.com

Her books can be found on

Posted by Jeannie Zokan at 8:58 AM No comments: