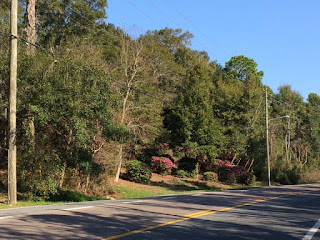 I love my commute, and the main reason why is since I work part-time, I don't have to do it every day.
Even this lovely drive along what's literally called Scenic Highway would get old day in and day out. These pictures, taken out my car window, don't do justice to the beauty and diversity of my drive along the causeways and waterways, the mansions and hilltop overlooks,  the moors found in Milton. And right now, the azaleas are blooming everywhere. It's breathtaking. 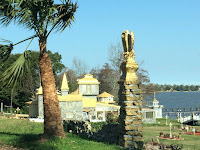 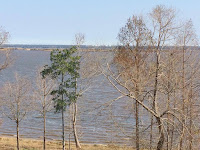 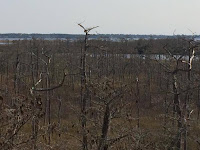 I'm not big on change. I like listening to the same songs in the same order when I run the same course, I like eating the same breakfast every morning (cheerios and cherries with soy milk -- weird, I know), and settling into writing with the same routine of computer games. (I wrote a short piece about my writing process, See the post here.)
On my drive to work, though, one of my favorite things to do is look for new things. One house has two dog statues that look completely real, but they can't be; they haven't moved in all this time. I've named them Liz and Eddie. During the holidays someone had a 20-foot blow-up of Rudolph's Abominable Snowman in their front yard. There's no telling what's going on at the gold house with it's fountains and Bentleys!
Although 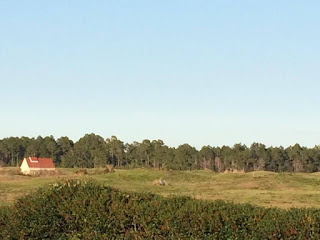 I'm watching countless home improvements and new construction, what makes me happiest are the little touches I notice. A new planting area, a tire swing from a tree, a holiday wreath on the door.This is a beautiful world because people are making it beautiful, and I challenge you to find that beauty along the roads you travel.
Posted by Jeannie Zokan at 7:49 PM No comments:

Labels: beauty along the roads you travel, Hallmark, Milton, Pensacola, scenic highway, The Existence of Pity

Bringing "The Existence of Pity" to Life 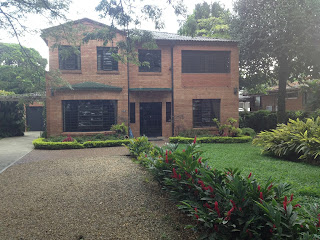 The setting of my novel, The Existence of Pity, comes from my youth. I grew up as a missionary kid in Colombia, South America, but I certainly didn't experience the conflict Josie faced. This is a picture of our house as it looks now. The current owner has made it more beautiful, but I miss the towering bougainvillea around the front door.

Here is just one of many photo of the Baptist Seminary across the street. Although much of the land has been sold, the open fields and grand buildings make the place as impressive as ever.
﻿﻿﻿﻿﻿﻿﻿﻿﻿﻿﻿﻿﻿﻿﻿﻿﻿﻿﻿﻿
What follows is an excerpt from my book about the Plaza de Caycedo:
Cali's downtown streets swarmed with people as we headed toward the park to sit on thick concrete benches under towering palm trees. Some Colombians were dressed for work, moving quickly past us, while others relaxed with their friends in jeans and T-shirts.
"That looks fun," I said, pointing to a group kicking a soccer ball around.
"Yeah." Aunt Rosie leaned back and closer her eyes. "Do you realize, Josie, we could be anywhere in the whole world?"
"What do you mean?"
"I don't know; it just seems like people are the same wherever you go. Every city has a park for people to hang out in, and it usually has a statue of an important person in the middle." She opened her eyes and pointed to the bronze image of a man clutching a flag. "Who is that, anyway?"
"I'll go find out." I jumped up to read the plaque. Returning, I told her the statue was of a man who helped Cali gain its freedom from Spain. The park had been a public market in the 1600s.
As cathedral bells rang out, I looked around the old park with new eyes, wondering how much -- or how little -- had changed in three centuries. When the bells finally stopped chiming, I pulled out my camera to take pictures.
"I'm glad you like your new camera," Aunt Rosie said.
"Maybe I'll become a photographer for National Geographic one day." I took a picture of the statue with palm trees behind it, then one of the soccer ball flying in the air. "I'll travel the world, visiting all those parks."
Posted by Jeannie Zokan at 11:17 AM No comments: