I found this gem on audio at my local library and loved it so much I bought the book version to read again, and to dog-ear some pages. Holy Cow, published in 2002, is the story of Australian reported Sarah Macdonald who follows her fiance Jonathan Harley, also a writer, to India for six months. It becomes a two-and-a-half-year quest for inner peace.

When she begins with having her palm read, I knew I'd love the book. (In Courage Without Grace, my main character is a palm reader.) Although Holy Cow is beautifully written, full of humor and wit and thoughtful observations, it is not for the squeamish. Macdonald describes with unflinching detail the crowds (one billion and counting in an area about one third the size of the States), the pollution, the begging, and what seems to be ever-present death. This ugliness seems to be India's strength. When Macdonald sees how happy its people are, a man explains that Indians see those who have a harder life than they do and are grateful, thanking God for what they have. But we Westerners look at the people above us and think, why don't I have what they have? This constant comparison creates our unhappiness. Hmmm...

"India is beyond statement, for anything you say, the opposite is also true," Macdonald says. "It's rich and poor, spiritual and material, cruel and kind, angry but peaceful, ugly and beautiful, and smart but stupid. It's all the extremes."

When Macdonald goes on a silent meditation retreat for ten days, she describes it in her usual candid way, as a "brain enema." This is Vipassana, an ancient Buddhist training technique, and one of its theories states that, "Unconscious thoughts create physical sensations, so letting sensations arise and pass without reacting gets rid of unconscious pollutants within our mind." For the first few days, she is overwhelmed by the silence, the aches and pains, and her restless mind, but by the end she says, "I skip out the gates, down the hill and back into India on air. My mind is clear, my heart is open, everyone is beautiful, everyone is worth loving, the world is wonderful and I feel universal love and compassion for all. For the first time in my life I'm living in the moment and I no longer miss my job, perhaps because my need for outward success to feed the ego has diminished."

Alas, she doesn't maintain the euphoria, and her quest continues as she learns about Islam, Hinduism, Sufism, American Sikhs, Hare Krishnas, Jainism, Judaism, Indian Christianity, and Parsi Zoroastrians, who "leave out their dead for vultures believing it's the cleanest, most hygienic way of getting rid of the soul's temporary home." 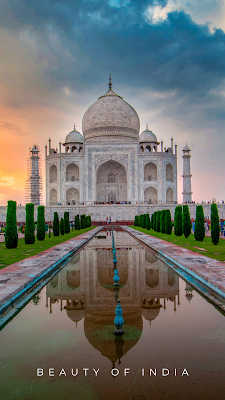 "I've made a start in India along my path to personal transformation and inner peace. "The Sikhs have shown me how to be strong, the Vipassana course taught me how to calm my mind, India's Muslims have shown me the meaning of surrender and sacrifice, and the Hindus have illustrated an infinite number of ways to the divine."

And yet, after all her seeking, she adds, "A phrase from the Dalai Lama's teachings comes back to me; 'Some will be drawn to Buddhism but I really think it's best that you try and find truth in the religion of your forebears and ancestors. It is very hard to change religion. I think it's safer not to.'"

Some may say I've left out the best aspect of this book: the people Macdonald meets as she travels all over India in this rollicking adventure. Oh, and the part where her now-husband Jonathan is in Afghanistan--and it's September 11, 2001. There's something in this book for everyone, and what speaks to me is her spiritual journey.

"I've learned much from the land of many gods and many ways to worship. From Buddhism the power to begin to manage my mind, from Jainism the desire to make peace in all aspects of life, while Islam has taught me to desire goodness and to let go of that which cannot be controlled. I thank Judaism for teaching me the power of transcendence in rituals and the Sufis for affirming my ability to find answers within and reconnecting me to the power of music. Here's to the Parsis for teaching me that nature must be touched lightly, and the Sikhs for the importance of spiritual strength. I thank the gurus for trying to pierce my ego armor and my girlfriends for making me laugh. And most of all, I thank Hinduism for showing me that there are millions of paths to the divine." 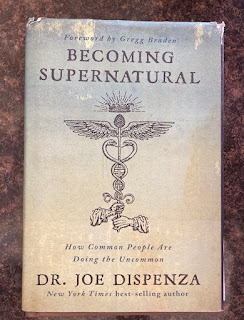 Bestselling author Dr. Joe Dispenza says 95% of the thoughts we have today are the same ones we had yesterday, and he wants to make sure our thoughts are helping us move forward, not holding us back.

I bought a hardback copy of Becoming Supernatural: How Common People Are Doing the Uncommon from Amazon because my friend Julie insisted I read it. It's a cerebral book, and my brain hurt from the effort of understanding it, but I certainly learned a lot. Dispenza, who's mantra is "Where attention goes, energy flows," opened my eyes to the scientifically proven importance of thinking positive thoughts. He says, "How you think and how you feel literally creates your personal reality."

I appreciate that Dr. D has been able to track and explain the power of maintaining positive emotions, but for the life of me I wasn't able to feel unlimited last weekend. Chris and I visited family in Atlanta and we packed a month's worth of activities into three days. Somehow everything worked out, even the trip to the DMV, and we had a wonderful time. But there was definitely some lower-vibrational energy going on, mainly fear as Chris and my brave daughter maneuvered the Atlanta highways.When Dispenza says, "You have to think greater than the way you feel to make any real, lasting changes," he adds great advice. An excellent way to level up is to look around for something - anything - to feel grateful for, like a beautiful red rose or a purring black cat.

Another way is the following chakra meditation. 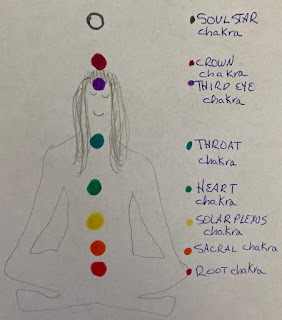 "Begin by placing your attention in the first energy center (the root chakra at the base of the spine), and then move to opening up your attention to the space around this center. Once you can sense this space around the energy center, bless that center for the greatest good, and then connect to elevated emotions --like love, gratitude or joy--to raise the frequency of this center and also create a coherent field of energy. Do this for each of the seven energy centers in the body, and when you come to the eighth center, a place about 16 inches above your head, bless this center with gratitude or appreciation or thankfulness, because gratitude is the ultimate state of receivership.
"Remember: the more powerful your feelings, the more you are up-regulating your own genes. Bless your body, bless your life, bless your soul, bless your future as well as your past, bless the challenges in your life, and bless the intelligence within you that is giving you life." 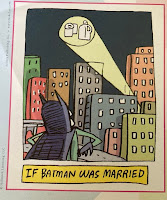 Here's what "up-regulates" me. Appreciation for my family and ancestors, dear friends, pets, my good health, my house, my books, the beach, morning tea, etc. I'm also grateful for the things that make me laugh. On those days when I can'ts seem to find my way out of fear (or Atlanta), I look back on the happy times I've collected, thanks to Jeanne Robertson. Those funny moments continue to delight, and as a result, my personal reality becomes a place of joy.
Posted by Jeannie Zokan at 10:24 AM 2 comments: