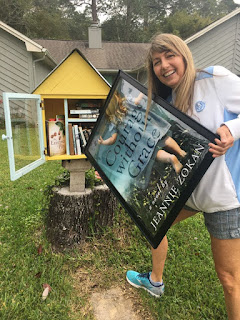 Gulf Breeze, Florida has a wonderful network of Little Libraries. Here's a list of them put together on a map by Diane Skelton. Very impressive work! local little libraries

My husband and I like to bike around our neighborhood, and we pass two of them each time! 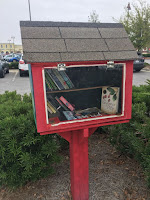 In honor of the release of Courage Without Grace I put five copies of my first book, The Existence of Pity into five Little Libraries. If you happen to pick one of them up, let me know!

Meanwhile, since it's release day, Courage Without Grace is available for $2.99--but only for 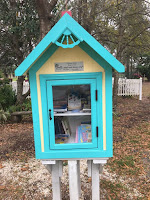 Posted by Jeannie Zokan at 5:01 PM No comments:

When the first review of Courage Without Grace arrived in my email, I took a deep breath before opening it.
No writer can ever be sure how their words will affect others. Sure, I heard plenty of feedback from readers and editors for this book along the way, but I knew them personally, or at least professionally. Now my book is officially "out there," and I have no control over how it is perceived.
Thankfully, Jessica from "For the Love of Dewey," LOVED it. Whew!
Here's how her review starts:
"We were super excited when author Jeannie Zokan reached out to ask us if we would review her latest novel Courage Without Grace, which is to be released on Marsh 30, 2021. As you can probably tell by my lack of reviews, I haven't been motivated to read as much as I usually am (let's blame it on pandemic life), so I was a little worried that I wouldn't be able to finish this novel before the 30th. However, once I started reading it I couldn't stop. This novel turned out to be just what I needed to get me out of my reading (and reviewing) slump.
I'll jump ahead and tell you she gave it FIVE STARS! Or in the case of her blog, 5 coffee beans!
Go here to read the rest of her review: fortheloveofdewey and follow them on Instagram, @fortheloveofdewey!
Posted by Jeannie Zokan at 4:53 PM No comments:

One other newspaper article in the Washington Post, this one in the Weekend section, told about my palm reading in the capital. This one, written by Larry Fox and published on January 5, 1990, was called "The Futures Market" and starts like this:
"There I sit, an otherwise normal-looking middle-aged male, as a younger and otherwise normal-looking woman uses a hand-sized roller to spread greasy, black ink over my palms as we sit at a white linen-covered table in an upscale restaurant while the waiter watches nervously, wondering perhaps whether to dial 911 and report the rebirth of the Black Hand Society in his Adams-Morgan bistro. 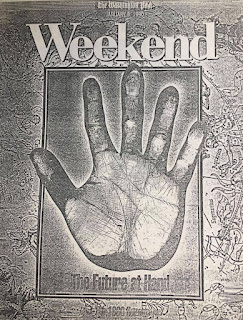 "Relax, we assure the waiter, no problem here. The woman and I are on a search for information about my past and my future. That's where the inky palms come in. The inked flesh is pressed onto white squares of paper, setting out in fine detail every tiny line, crack and whorl. Some say those minute etchings unlock many of life's mysteries and that if you can read them, you can see the future and understand the past."

In Courage Without Grace, Josie lives in DC and works as a palmreader. She is trying to correct a mistake from her past so that she can move on, but she keeps walking into more problems--or riding motorcycles into them!

Posted by Jeannie Zokan at 3:34 PM No comments:

My Claim to Fame 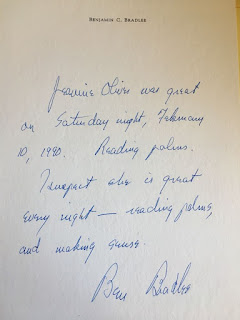 In Courage Without Grace, Josie reads palms at parties, but she doesn't meet anyone famous. In reality, one of the most memorable experiences I had in Washington, DC was reading palms at a party hosted by Ben Bradlee and Sally Quinn. Mr. Bradlee was the executive editor of the Washington Post at the time, and his socialite wife knew everyone who was anyone in the capital. I remember being awed by their beautiful home (so many books!) and by their kindness to me. I was also impressed with the famous faces I saw.

I don't remember how any of the palm-readings went, but I do remember meeting Carl Bernstein. I know it was him and not Bob Woodward because he told me Dustin Hoffman played him in All the President's Men, not Robert Redford. I was all of 25, so I'll admit I was disappointed it wasn't Robert Redford! I had made it a habit to ask for reference letters when my time was up, and I still have what Mr. Bradlee wrote, on his letterhead.

"Jeannie Oliver was great on Saturday night, February 10, 1990. Reading palms. I suspect she is great every night--reading palms and making..." what?! It's been  years, and I still haven't figured out what that last word is! What do you think it says? 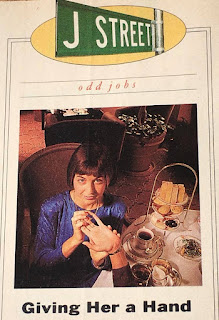 Later in 1990, Anita Womack wrote an article about me in The Washington Post Magazine entitled "Giving Her a Hand." Here are highlights:

"Coffee? Tea? Or how about a peek into your future? Meet Jeannie Oliver, teatime palm reader at the park Hyatt Hotel. She sweeps into the hotel lounge Wednesdays and Thursdays at 3 and begins asking customers if they want their palms read.

John Herrmann, a senior cataloguer at the Library of Congress, has had his palm read several times and says he learns something new about himself every time. What's more, he recently took a vocational test and says Oliver's findings mirror the results. "It's cheaper than a vocational test and certainly a lot more fun," he says. It can, of course, get much more expensive; Oliver's full sessions are $60 an hour.

How does the daughter of Baptist missionaries end up in a business like this? By having her palm read, as Oliver did about two years ago. 'It made me feel so good about myself, and I said, I'd like to do this for other people.'"

Click here for the ebook version of   Courage Without Grace It's still on pre-order at only $2.99! Grab your kindle/ereader copy today! And not to worry, I'll keep you posted on the paperback edition.

Posted by Jeannie Zokan at 2:13 PM No comments:

In writing my book, Courage Without Grace, I was able to revisit, at least in my mind, some of my favorite things about Washington, DC, and the statues ranked high on that list. Iconic monuments are visited by millions each year (well, maybe not in 2020) and fountains and men on horses can be spotted throughout the capital. Then there are the unobtrusive guardians, like the lions who flank the Taft Bridge.

From Courage Without Grace: "I crossed Taft Bridge along Connecticut Avenue, high above Rock Creek Park's tall trees and winding road. Four huge statues of lions guarded the bridge: two on each end. I loved seeing their shaggy stone heads uplifted over huge outstretched paws, and called to them each time I walked by. Their magnificence, reminding me of the loftier aspects in life, always lifted my spirits, and I took photos of them often."

The lion pictured here is an original, created in 1906, but the lions in DC now are replacements installed in 2000. They are just as impressive, and I look forward to visiting them during my next trip to DC.

I'm not sure where my fascination with lions came from, but I see them everywhere. In front of houses and businesses, carved into walls in downtown Pensacola, for sale in stores, the list goes on. We even have a pair of our own. A few years back, my sister-in-law gave them to Chris and me, and they stand in front of our garage gym. I just noticed today, taking this picture, that there are lions carved on the lions!
When fellow writer Diane Skelton learned about my love for lions, she told me that
the lion is one of the symbols for her husband's fraternity, Sigma Alpha Epsilon. To SAE, "The Lion represents courage, strength, and heart. They are associated with radiant solar energy. In astrology, with the sign Leo, they remind us to take time to relax and bask in the sun and to enjoy the warmth of our accomplishments. Because they live and hunt together, Lions can also symbolize strength in our family and friendship ties." How inspiring is that?!

Do you have a lion in your life? I'd love to see pictures of the lions by your front door, in your neighborhood, or ones you've seen in your travels. I look forward to seeing much more of these symbols of courage, strength, and heart.
My second novel, Courage Without Grace, will be released online at Amazon.com, BarnesandNoble.com, Kobo Books, Google Play, and iTunes on March 30, 2021. Check out The Existence of Pity here!
Posted by Jeannie Zokan at 9:57 AM No comments: