A Kiss From Al Jarreau 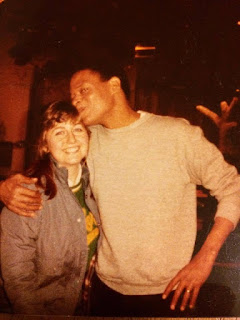 Al Jarreau died on February 12 of respiratory failure two days after retiring from his long and amazing career making beautiful music. He was 76.  His album Breakin' Away and its upbeat hit with the saxophone solo, "We're in This Love Together," had me buying my own sax at a yard sale. I love his music; his songs are still on my playlists after three decades. And one of my all-time favorite memories is meeting him on my twentieth birthday in New York City.﻿﻿﻿﻿﻿﻿﻿﻿﻿﻿﻿﻿﻿﻿﻿
After my brother moved to the Big Apple, I visited him over Spring Break and saw the Twin Towers, the Saint Patrick's Day parade, the subway, Central Park, and Dave's speck of an apartment. When Dave's girlfriend, a page for NBC, happened to mention Jarreau was singing on "Saturday Night Live" I begged her to get me in. She couldn't get me a ticket, but she told me to just walk in like I owned the place and no one would care.
﻿﻿﻿﻿﻿﻿﻿﻿﻿﻿On Saturday the 17th of March, I gathered my birthday courage and, with my heart pounding out of my chest, walked down the long corridor in 30 Rockefeller Plaza slipping past a man standing at the door to Studio 8H. A talkative group of tourists distracted him, giving me the opportunity to grab a seat. I'd been warned there was a good chance Al Jarreau would be backstage, but I spotted him talking to someone in the audience. Keeping a low profile, I sneaked closer to him. When he finally turned his attention to me, I remember laughing with him, having someone take our photo with my little disc camera, and wishing the moment could last a little longer.
Back at Baylor University, I had my little disc developed at the local H-E-B (a Texas grocery store chain), hoping my picture with Al Jarreau turned out. As you can see, the picture made my day, my year, my decade. He's kissing my head! I had no idea he was kissing my head and Al Jarreau is kissing my head!
Meeting Al Jarreau came about as a result of a series of miracles and a little moxie, and it reminded me that good things would come to my life. Every 20-year-old needs to know that. Thanks Al, for so much more than just beautiful music. I will miss you.

Posted by Jeannie Zokan at 7:08 PM