Tomatoes in the Garden 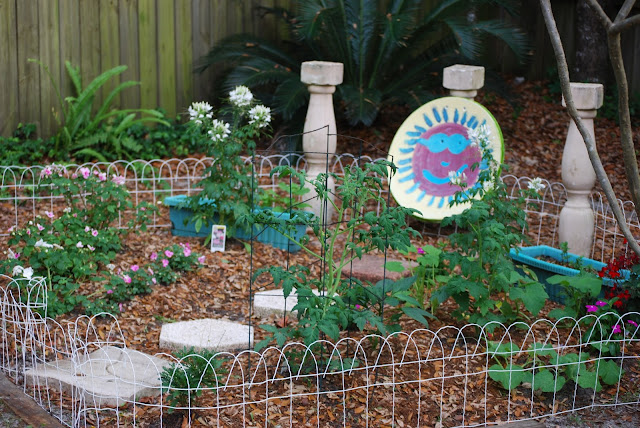 There is a space in our back yard that has undergone many transformations.  First it was just part of the yard.  Then we put an above-ground pool in the area.  A few years later we converted it to a basketball court, then we put a trampoline there.  Now, the space is a garden and we are amateur gardeners.  But the plants we bought from Lowe's seem to know what to do, and we have been amazed at how the cantaloupe and cucumber are taking over.  Mostly, though, we are watching the tomato plant with bated breath as one phenomenal tomato ripens.

I have no idea what will happen in the end.  Maybe our tomato will feed some hungry creature in the night.  Maybe nothing will find it and we will split our harvest four ways at dinner one night.
And that's my tie-in to writing.  I can't count on the end result, but the process is pretty amazing.  I will plant seeds and water them, then watch to see what comes of them.  That being said, does anyone have suggestions for protecting plants?
(Thanks to Linda and Rayco Stamenkovich for the cool pillars and to Lynn Keisel Huber for the paint on our satellite-dish sun.  And Andrea Walker, we need little garden signs!)