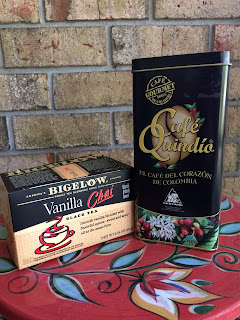 There's no telling what bug I caught. I didn't have a fever, I just couldn't get out of bed. For days. I couldn't eat, either. But eventually, I recovered. Life on the other side of illness is pretty amazing. I'm so glad to be alive - and feel good! Except...

I started my coffee addiction late in life: about ten years ago, according to my gold card from Starbucks. And while I was sick, I didn't drink the stuff. When I felt better, it occurred to me to just stop drinking it, mostly because I've heard it's not great for you. Cool. No big deal, I thought. I just won't start up again.

But there was a problem. I found myself not wanting to get out of bed in the morning. Not from lack of energy, just from the lack of a really good reason to get out of bed. Turns out, coffee in the morning was doing more than just filling me up, and life without it was pretty depressing. Oatmeal certainly wasn't going to get me out of bed. I needed the promise of a warm beverage in my hands, and tea, even delicious vanilla chai tea, couldn't do it.

A reason I don't quite understand was at play. I felt alone, sitting by the kitchen window as the sun shone on my face. I missed sharing the daily drink with my worldwide community of coffee drinkers. Across America alone, about one hundred million others have been sipping their caffeine with me all those mornings, and they were feeling the perks of the java while I was not.

If I had a plan in place, if I had a stronger resolve to steer clear of coffee, it probably would've happened. But today I succumbed. I had a cup of coffee. It wasn't the delicious cup I remembered, but that's probably because my taste buds are still on the fritz. It was, however, very satisfying. Something stronger brought me back. I'm part of the collective again, and glad to be here.